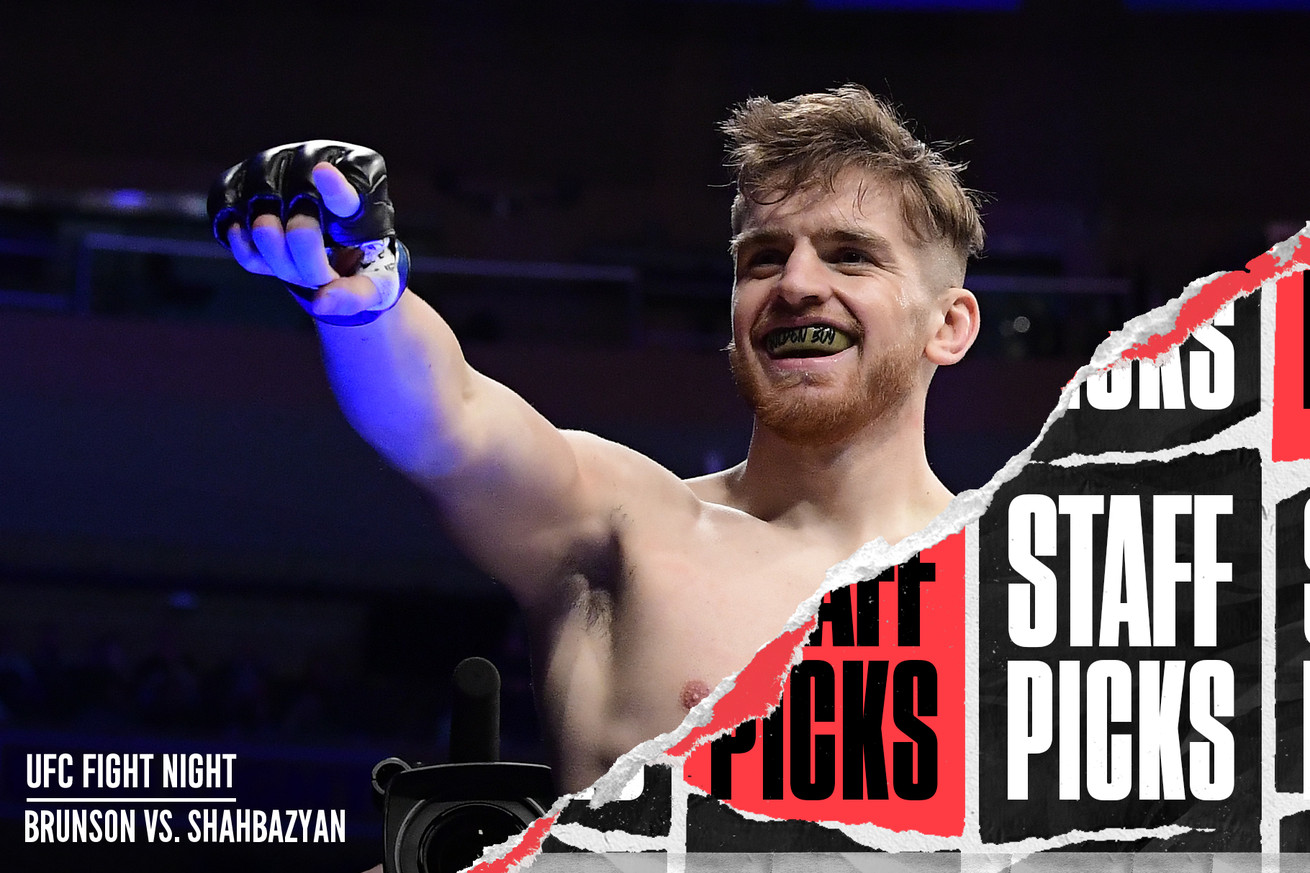 Check out the Bloody Elbow staff’s picks and predictions for Saturday’s UFC Vegas 5 card at the APEX Facility.

The BE team has made its picks for UFC Vegas 5 and we’re all in agreement that Edmen Shahbazyan will beat Derek Brunson on Saturday. Likewise for the co-main between Joanne Calderwood and Jennifer Maia, with everyone siding with JoJo.

Mookie Alexander: Brunson has the power to hurt if not knock Shahbazyan outright. If this was a five-rounder I’d be concerned about Edmen’s gas tank but it’s not like Brunson is known for his cardio, either. This is a fight that favors Shahbazyan because of his athleticism and big power that he generates on the feet and on the ground, but I won’t count Brunson out just because of his vicious left hand. Edmen Shahbazyan by TKO, round 2.

Phil Mackenzie: Hmmm. Shahbazyan is a calm, accurate striker and Brunson is… not, and in these kind of style matchups he’s stumbled in the past. Notably, Tavares -> Brunson was basically Adesanya’s path to the title (well, plus Anderson). There are still elements of concern here – Shahbazyan hasn’t fought any southpaws in the UFC and is a heavily jab-centric fighter, and he was also physically overpowered late by Darren Stewart. Brunson can do that, too, but he has to survive both Shahbazyan and his own love for self-sabotage early. Edmen Shahbazyan by TKO, round 2.

Zane Simon: This feels like the kind of fight that could just as easily tell us nothing at all as it could make a massive statement for both men. If Shahbazyan comes out and melts Brunson early, he’ll have been the 5th person to do so. And it won’t particularly give us any extra insight on the growth of his overall game across multiple rounds. But, if Brunson can put a grind on Shahbazyan and stay cautious and keep this fight gritty and kinda messy, he could absolutely show that not only has he improved a lot, but that the prospect isn’t quite ready for the big show yet. My guess is the former happens, however, and we don’t learn a lot out of it beyond the fact that Shahbazyan has a nicely educated left hand and a straight 1-2. Edmen Shahbazyan via TKO, round 1.

Mookie Alexander: This is probably going to be a close fight but I trust Calderwood to land the more telling blows and outpoint Maia. It’s a risky fight though because it’s short notice and Calderwood could go from having a title shot to not having one with a loss. Joanne Calderwood by split decision.

Zane Simon: There’s really not a lot separating these two. Both tend to work at a pretty even clip, both have trouble putting opponents away, and both tend to take a fair amount of shots to give them. Maia is very difficult to take down out of the clinch and against the cage, which probably means this fight stays standing. She may be a bit more likely to land the cleaner punches there, but I’m giving the edge to Calderwood’s variety and potential to work at just a tiny bit higher rate out at range and in the clinch. Still, this has razor-thin split decision written all over it. Joanne Calderwood by decision.

Mookie Alexander: I’m a bit worried about Luque’s damage absorption. The Barberena, Perry, Wonderboy, and Price fights took a lot out of him and I think Brown may just be catching him at the right time. Luque may have the better chin and a wicked, underrated submission game but the way Brown has performed lately has me thinking he’s turned a corner and he’ll be able to surprise Luque in the clinch and at range with his jab. Randy Brown by unanimous decision.

Zane Simon: Brown certainly has the range to trouble Luque, and he’s a sneaky good clinch fighter. But Luque thrives in the middle distance, and I’m not sure I see enough evidence that Brown has a good enough command of range overall to keep that from being a constant problem. Luque is also ungodly tough, so even if Brown does get his moments, how much pressure counterpunching can he really take before he eats the kind of shots that put him away. Vicente Luque by KO, Round 3.

Mookie Alexander: Vannata is trying to be more technical and not gas himself out. It might work but I also think Green’s takedown defense, strength, and ability to outbox him is pretty important. This is going to be another close bout but one I think Green is able to get. Bobby Green by split decision.

Zane Simon: Vannata looked much more comfortable fighting a slightly slow paced, more even and evasive bout against Yancy Medeiros, something he’s struggled to control through his early UFC fights. If that’s going to be a trend, then Vannata’s power and variety make him a really difficult out for just about anyone. And, against really difficult outs who can hang with him standing… it’s very hard for me to pick Bobby Green. Not because he won’t do well, or consistently land shots. I’m sure he’ll do both. Hell, he might even land more than Vannata. But he likely won’t control the pace, and he won’t be landing the kind of offense that judges take notice of. Lando Vannata via decision.

Mookie Alexander: Giles just has this love of throwing fights away and that seems like a bad idea against someone who can submit him. Kevin Holland by submission, round 3.

Zane Simon: Giles has power, and he’s got a few tools everywhere the fight can go. But, when taken through a long, complicated fight, it often becomes pretty clear that his technique in any one area only goes so far. Defensively, he tends to slide backward with his chin up, something that cost him bad against Zak Cummings. And on the ground, he tends to get defensively unaware while pursuing offensive opportunities. Which really cost him against Gerald Meerschaert. Holland can be wild to his own detriment sometimes, but he’s very tough, and a crafty opportunist at any range. Eventually, I just see Giles giving Holland too many chances to make that craftiness count. Kevin Holland by submission, round 2.

Rest of the card