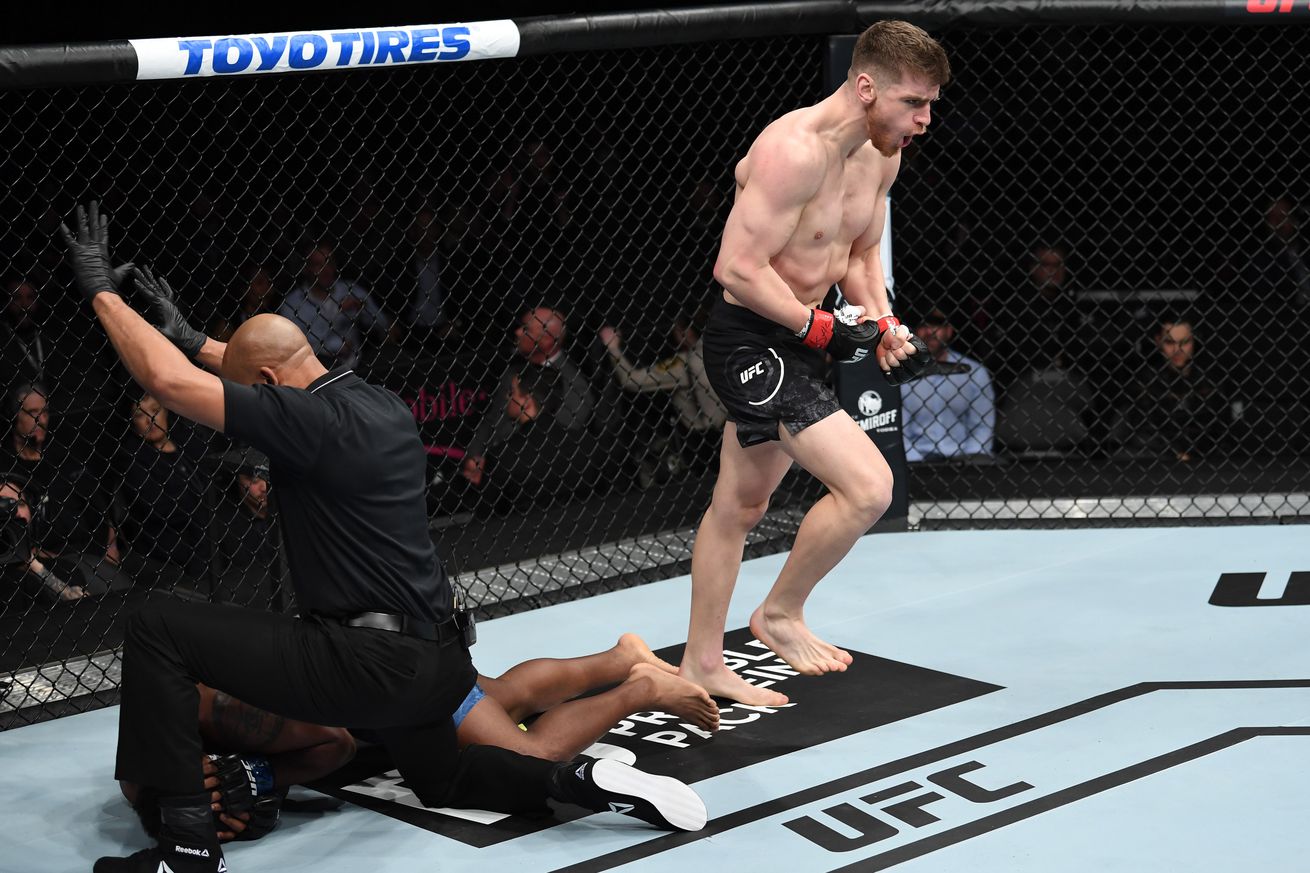 Get the rundown on the UFC’s return to Vegas on August 1st, headlined by middleweights Derek Brunson and Edmen Shahbazyan on ESPN+.

Now back on home soil, the UFC has made it easier for them to plug in different fights since more fighters are available locally and on short notice. Good thing, too. The prelims got picked apart due to various complications, but the main card remains intact.

And that’s what life looks like now. It’s harder for a lot fighters to train and prepare adequately given the shape of the world now. Just something we and the UFC have to get used to for the immediate foreseeable future. So with that sour note, I humbly present to you UFC Fight Night: Brunson vs Shahbazyan.

This is one where it’s hard to know what happens regardless of who wins. Brunson’s (20-7, ranked 8th) apparently been in gatekeeper territory for sometime, but the only person that hasn’t realized it yet is him. It would seem that since the Robert Whittaker fight he was definitively out of any serious contention and used as a measuring stick by UFC management. That’s not to say he’s not a good fighter, quite the opposite. He hits hard, wrestles well, is a tremendous athlete and puts it all on the line. The problem is he’s way too confident in his boxing, throws everything at the wall, gets sloppy with his takedowns, relies on that same athleticism and… puts it all on the line. That leads to him getting tagged, countered, outscrambled and busted up by fighters because the fight IQ goes out the window once he decides to get too loose. But he might still sneak back into the top portion of the division with a win over an electrifying young prospect, but nothing is guaranteed.

He had a good showing against Anderson Silva and in my opinion, and fought smart against Lyoto Machida and Ian Heinisch (we will not be discussing the Elias Thedorou fight, I actually do make the rules). He’s more than relevant in the division, and could inch slightly closer to the top five with a win, although may not quite make his way into that club. But for now, that’s kind of his role. That’s where Shahbazyan (11-0) comes in. He hasn’t just earned some good wins in the UFC, he’s finished three out of four after that savage win in Contender Series to get his foot in the door.

Shahbazyan is a rarity, not because he’s a good kickboxer with decent range, great power and a Judo background that aids his takedown defense, but because he’s the only fighter under the tutelage of Edmond Tarverdyan that has legitimately improved from fight to fight. I don’t mean this as disrespect, nor do I mean to dig up old bones talking about previous fighters that made their way through Glendale. It’s just a fact, the kid is pretty great. I had many reservations about him coming into Contender Series, in fact I was a tad dismissive given the previous opponents he’d faced.

He’s proven me wrong. Working against some of the bulkier middleweights from the middle of the pack is one thing, but now he’s working another bricked up guy with grown man strength and without question the best wrestler he’s faced. Can his combinations, speed and work down the middle disrupt Brunson’s pace? Sure, and given that Brunson can get knocked out, Edmen may in fact shut his lights off. Yet if Brunson paces himself and doesn’t let him get too comfortable, he might be able to outwork him over time and pressure him against the cage, test his cardio, then hurt him on the ground. But he might also eat the Glendale Fight Team special if he dawdles around trying to get a single or double leg against the cage so he can get elbowed all the way back to North Carolina. Shahbazyan works well in open space, frantically makes his way back to the feet and defends takedowns well early. Shahbazyan totally can and should win this, unless Brunson is completely on his A-game and doesn’t get too greedy.

Calderwood has had some ups and downs as all fighters do, but she hit the ground running after leaving Tristar for Syndicate and going 3-1. Her lone loss to Katlyn Chookagian didn’t really overshadow how improved she’s looked against Ariane Lipski and Andrea “KGB” Lee. Still got the sharp Muay Thai approach, still got the aggressive elbowing off her back and power from top position. Her clinchwork may be the best in the division aside from the champ, Valentina Shevchenko, and her use of range is also improved.

Maia is not a stranger to this. A workhorse that’s respected everywhere she goes, she’s been extra tough in her Invicta run and supplemented that with a series of kickboxing fights outside of MMA. Maia’s ground game is more control-oriented, with not much in the way of submissions as she has no submission wins. Her submission defense does give opponents fits along with her tenacity throwing punches and sneaking in leg kicks. This could be the fight of the night as well, seeing how bold both of them are when at their best.

What happens when you take two underappreciated welterweights that happen to be excellent athletes with great accuracy and hit super hard? You get an excellent bout like this one, where two fighters that throw heat and love chasing the finish get to collide.

Luque had a great six-fight streak snapped by Wonderboy Thompson, but came back to have a frantic one against fellow violenceweight fighter Niko Price. The fight ended due to an eye injury, but Luque got some shine in there and survived some hard hits. Brown’s been a joy to watch since graduating from the Ring of Combat gauntlet, with a 5-3 UFC run that doesn’t really do justice to how good he is. Riding back to back wins over Bryan Barberena and Warlley Alves, he’s got some real momentum since both were some impressive finishes. His clinch remains lethal, his lanky guy submission work is good, and he’s much improved in his defense standing and on the mat.

Luque is a tremendous opportunist that throws heat down the middle, works leg kicks effectively and occasionally works the body. It’s how he deals with Brown in-close that seems like a larger concern. Brown has the tools to dismantle Luque’s overall game, and is a fresher fighter that is extra tricky off his back. But Brown also has to be mindful of how Luque swarms from top position and is hard to keep off of you once he’s there. Another fight with great potential to be a major banger.

Not sure that we really needed this rematch, but we should be glad to have it. Considering their previous encounter was a draw, it makes sense. Green (25-10, 1 draw) remains a sneaky and slick striker with very polished boxing and movement, a fair amount of volume and great counters. His takedown defense is great, and when that fails, he’s extra smart about conserving energy and getting to better positions. Vannata (11-4, 2 draws) has a sensational striking style and seems to genuinely have a ton of fun out there. He’s great to watch whether he lets loose or has a more conservative approach. Green starts falling behind when there’s less output on his behalf, and his antics don’t always end up being enough for the judges’ approval. His win over Clay Guida just last month was way more fun than it could have been, neutralizing the wrestling and making his strikes count.

Lando’s coming off a good win as well, over Yancy Medeiros earlier this year. His pace is good, and he’ll have to make adjustments in the rematch to cut off Green’s angles and keep him on his back foot. Green could also use his wrestling, but we know that’s not where he prefers to keep it.

Kevin Holland (17-5) is, in short, a very special talent. He’s not just athletic, he’s got patience and great shot selection with his strikes. He still seems to be putting some things together in terms of shifting phases and finding consistency. With great striking, good sprawls, an underrated submission game and accurate knees to carve opponents up in the clinch, he’s a problem

And his opponent Trevin Giles (12-2) is a sturdy middleweight that’s only lost twice (both by guillotine, back to back), but packs plenty of power and has submission chops of his own. Things get a bit complicated when you consider Holland’s effective use of range, although Giles has also fought and defeated Ryan Spann, another tall fighter that packs a wallop. Giles might be able to take him down and keep him there for extended periods, but make sure to bust him up enough to put things in his favor when the fight almost inevitably goes back to standing. This should be a test of patience for both and an opportunity to get something of a push up in the pecking order.